We often get asked why the name Vineyard 28? Does 28 mean something to us?

Are we the 28th winery? Is it 28km along Bagieau Road? 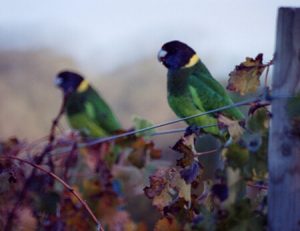 Our name is actually taken from a cheeky parrot- commonly known here in the West as the 28 Parrot.

When we first planted our vineyard these cheeky little parrots were a bit too helpful, snacking on new shoots and trotting along behind and nipping out new grafts. They loved us and all we were doing. When we started looking at names, we wrote lots of things down on a piece of paper, playing with our names, landmarks and the local landscape. Somewhere along the way parrots got noted down, and from that we became Vineyard 28. As Mark likes to say, it’s a bit like calling a beautiful Rose Garden – Aphid Park.

Today our parrots still enjoy an occasional springtime snack of new shoots, dead-heading the roses in my garden, and ventilating the cellar door lawn area by pulling it up by its roots. The best time to see them in action is early mornings and late afternoons, they rest in the heat of the day in nearby trees.

28 is actually a colloquial name for these parrots here in Western Australia, apparently due to their contact call – a whistled – twen-ty-eight – which if you listen carefully can be heard across south west forests.

Visiting the cellar door here at Vineyard 28, you may well catch a glimpse of these birds, but they prefer to be active in the early mornings and at dusk.