Dogs are often the first to greet you at the cellar door here in Australia, and we thought we’d tell you a little more about the wine dogs of Vineyard 28.

In New Zealand, Pippa grew up with a Boxer dog named Bruno. He was the babysitter, making sure she didn’t get up to mischief as a small child. Apparently, they were often caught sharing a biscuit or two. Mark was never a dog person until he met Pippa and him being allergic to cats meant they were ruled out as a family pet option. So, when Mark & Pippa bought their first house, like many, they started out with dog before they got to the kids.

Garvin, a border collie/kelpie cross, commenced life as a pup in suburban Box Hill, Melbourne, having left all his family back in country Swan Hill. He was named for Willie Garvin, the trusty side kick to Modesty Blaise.  Modesty Blaise was a British featuring a fictional character of the same name, created by author Peter O’Donnell and illustrator Jim Holdaway in 1963. The strip followed Modesty Blaise, an exceptional young woman with many talents and a criminal past, and her trusty sidekick, the aforementioned Willie Garvin, and their adventures.

Mark has a collection of these comics in his library. Garvin took to city life reasonably well as he had a huge quarter acre block and was walked every day. Garvin and Mark went to dog obedience school, where he was ranking as top dog of class until his last day when something got the better of him and he missed a command in his final test. 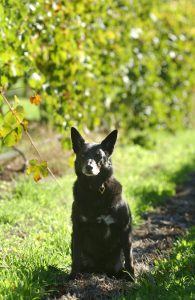 Garvin was a well-traveled dog, spending many weekends on the road, back and forth between Melbourne and the Victorian wine regions. He also flew West on holidays with the family, traveling in a cage in cargo, and then settling in for the long drive to Australind. Never once needing a toilet stop until he reached his final destination and the backyard at Mark’s folk’s place.In 1997 he moved with us to Western Australia to become our number one wine dog. He took to country life very easily and learnt very quickly not to tangle with the local reptiles. However he still got up to mischief in the house as one evening he ate a whole chocolate cake off the kitchen bench! Pip had made a cake for the kids to take to a school cake stall the next day, and left it to cool before icing. When she returned to the kitchen, it was to a floor decorated with chocolate cake crumbs and a guilty dog. 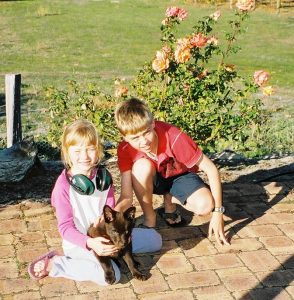 Moving forward to 2006 there was a family decision  that it would be good to add another dog to the mix (and the kids wanted a puppy) The idea was that Garvin could mentor and knock the new dog into shape, making sure he understood life on a vineyard and how to work a cellar door. Jasper arrived in the April of 2006, a locally bred Red Cloud Kelpie (just like Red Dog). There was only the two of them in the litter, and we often say he was very fortunate that we chose him. His brother ended up in Tom Price, and to this day Jasper has never liked very hot weather.

Sadly, Garvin had a stroke later that same year at 13 years old. It was a sad day for us all to say goodbye. Especially for Mark, as Garvin had always been his best mate and shadow. 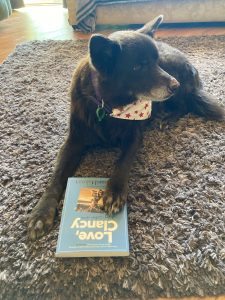 As many of you know, Jasper has gone on to have a great life here at the vineyard. During his younger years, he hated the rain. He loved being in the vineyard with Pip when she was pruning, but if it rained, he’d dive between her legs to get the benefit of her raincoat. Vintage has always been a favorite time of year for him with a crew of workers to tag along behind and all those grapes to be stolen from the crates, and 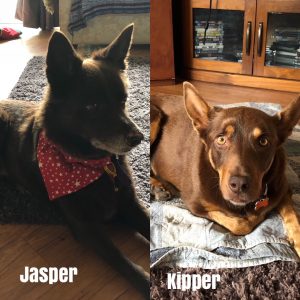 He has always enjoyed the company of other dogs. It would be remiss of me not to mention our other honorary vineyard dog, Kippa, who often has sleep overs with us when her family are away. Many a customer has fallen into the trap of throwing a stick for Kippa at the cellar door, not realising that she can keep the game up all day!

Jasper has been the cellar door concierge all his working life, and in recent months has mostly retired from these duties, preferring to sleep his days away on his favorite couch. He is most definitely in his twilight years, but we still see glimpses of the puppy in him when he grabs his tug-toy out of the basket to play! 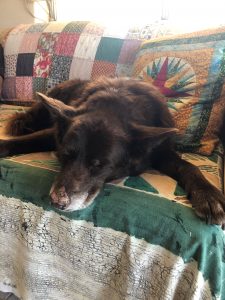 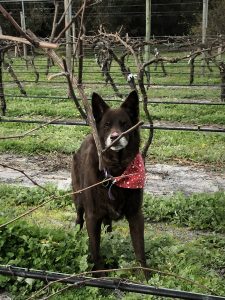 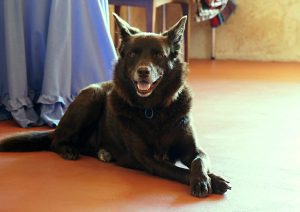