Where did the name ‘Bagieau’ come from ?

Bagieau Road has been our home and the home of Vineyard 28 for 23 years now. However, it is only in the past few months that we’ve learned about the origin of how it probably got its name.

My name is Gabrielle, Mark and Pip’s daughter, and I’ve just finished my undergraduate degree in history at the Uni of Melbourne. As part of my final history subject I was tasked with completing a research project on a topic of my choosing. Having been separated from my family and home this year due to border restrictions, I wanted to research something to do with my home.  Mum suggested looking into how Bagieau Road got its name. All she knew was that it was likely to have been named for Alexander Bagieau whose name is inscribed on the Yarloop War Memorial.

Alexander Bagieau moved to the Yarloop area from the Eastern States in 1912-1913 and was living and working as a jarrah hewer near Hoffman Bush Landing. When World War One began, he was part of the first wave of enlistments in September 1914, along with many men from the South West. He was assigned to the ‘B’ Company of the 16th Battalion and trained at the Blackboy Hill Camp up in Perth.

From there, Bagieau’s battalion was moved to Melbourne and then onto Egypt to join up with the Mediterranean Expeditionary Force for the Gallipoli campaign. The 16th Battalion suffered many losses during their time at Gallipoli, having held some of the most dangerous posts such as Pope’s Hill and Quinn’s post. During the August offenses, Bagieau was shot through the chest and transferred back to England to recover, where he met his future wife Celia James.

However, he didn’t recover fully from his injury, so was returned to Australia. During his time back home, he stayed with the Scott family in Yarloop and also attended the first ANZAC celebration. Having regained his strength, he returned to England in late 1916, received further training in bombing and married Celia. Bagieau was then involved in an accident at the bombing school where a grenade went off accidentally and wounded his face. He recovered quickly and a few months later found out he and Celia were expecting their first child. 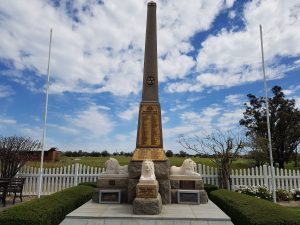 Having recovered from his injury, Bagieau was then transferred back to the 16th Battalion who were stationed in France in September 1917. He joined them in Ypres, Belgium and the Polygon Wood battle, where he was killed in action.

Despite consulting the historic geographic data held by Landgate and cancelled public plans held by the Western Australian State Records Office, no evidence has surfaced that proves the road was named after him. However, it is more likely the case that the road was known locally or informally by this name and when formalised, the origins were left out of the records.

So, next time you take a drive up Bagieau Road to Vineyard 28, you’ll know the story behind our unusual road name.