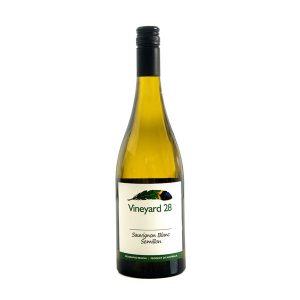 The 2017 Sauvignon Blanc Semillon has just been released and is now available online and at the Cellar Door.

Both the Sauvignon Blanc and Semillon grapes are known for their origins in the producing wines from the Bordeaux Region in France. Here in Australia we often see the two grapes blended to create either what is known colloquially as SBS or SSB. This three letter acronym we’ve adopted in this country, all depends upon which grape is in the greatest quantity in the blend. Sauvignon Blanc dominant then it is called SBS, Semillon dominate, then we see SSB. A little known fact to many of the public is that once we use greater than 15% of another grape variety in a blend then we are required to list that variety on the label.

Our pale straw coloured wine has been blended to gain optimum in flavour and balance but still maintaining the characteristics of Sauvignon Blanc. A clean crisp palate of crunchy apples and juicy limes, with a lovely freshy citrusy finish. Great to enjoy now as a light summer drinking wine.

Pop over to the Ordering page to buy some now – https://vineyard28.com.au/product/sauvignon-blanc-semillon/

Vineyard 28 is pleased to announce our wines are now showcasing at two great restaurants in Mandurah.

Duck Duck Moose on Mandurah Terrace has added the 2014 Vineyard 28 “The Alternative” Moscato to their wine list.

See you at these Mandurah Restaurants.

Award wining 2013 Arneis is now available for purchase.
The 2013 Arneis was awarded a Silver Medal at the 2013 Geographe Wine Show.

Picked February 2013, The Arneis is pressed within 2 hours of harvest. The juice settles then it is racked after 36 hours. The wine is then fermented for 21 days and was then left on lees for 2 weeks before wine was racked again. The wine was then further fined, cold stabilised and bottled in July. Pale yellow straw colour, with an aromatic bouquet. Intense and rich palate with nutty overtones makes a wonderful full bodied wine.

Vineyard 28 ‘The Alternative’ Arneis, Harvey 2013
Quality is on the rise in Geographe, particularly with alternative varietals.
Arneis is a textured, often white-spiced, nutty white grape variety from Piedmont, Italy.
Here in WA it delivers all that, with more peaches and mandarins, and plenty of freshness.
Drink by pool or sea.

Continue Reading 2013 Arneis now available
Menu
Licensee : Cumbers WA Pty Ltd     Premises Name : Vineyard 28     License Number : 6180088658     Class of License: Producer’s License
Warning: Under the Liquor Control Act 1988, it is an offence to sell or supply liquor to a person under the age of 18 years on a licensed or regulated premises; or for a person under the age of 18 years to purchase or attempt to purchase liquor on a licensed or regulated premise.
Cellar Door is open 10am to 5pm – Thursday  to Monday. Other days by appointment.
Or Order wine online, via phone or email.
Copyright © 2020 Vineyard 28     270 Bagieau Road West Harvey WA 6220     Phone 08 9733 5605
Website by CATCO Enterprises
Close Menu
×
×