What is it like to grow up on a Vineyard ?

Our daughter, Gabrielle shares her perspective on growing up on a Vineyard. 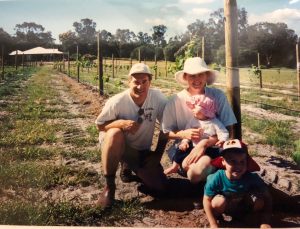 When I tell people that my parents own a winery and that I grew up on vineyard, they usually think that it was a glamorous upbringing, with idyllic scenes of vineyard. At points it was like that, but the majority of the time it was just growing up on a farm – at this farm we grew grapes – and the 10 acres where the cellar door, winery and main vineyard are, was my playground.

I was recently cleaning up an old hard drive and stumbled across a collection of photos from my childhood of the vineyard which prompted me to think about some of my favourite memories of growing up and I will share a few.

One thing I used to love was going out on the tractor with Dad. I’m sure there are photos of me sitting on his lap on the old blue tractor. He used to let me ‘steer’ and do a loop around the vineyard. Things have changed now though, as last time I was home I drove the tractor when we were putting the nets out in the vineyard.

When I was in school, I used to get the occasional day off at the start of the year to stay home and help with picking grapes and helping dad in the winery. Then during school holidays Mum and Dad gave me jobs to do in the vineyard to earn a little extra pocket money. In fact, one vintage Dad let me help make the Semillon, so I got a few days off to be there for all the important bits of the wine making process and would go down to the winery after school each day to check on my wine. Other jobs I did in the vineyard included leaf plucking, pulling out the canes after pruning and tying down the baby vines to the wires.

The No. 1 rule from Dad when we were young was that we weren’t allowed to wear thongs out in the vineyard. This was to keep us safe as sometimes snakes and lizards were hiding in the longer grass. This rule is still something I follow when I go home and when I’m in long grass or a paddock where I can’t quite see everything on the ground, I’m extra cautious about where I’m stepping.

You’d think that growing up on a farm, I would have a decent tolerance for spiders and not be scared of snakes or lizards. I don’t. I’m still scared of spiders, especially after seeing some creepy ones – or as Mum would say ‘beautiful’ – in the vineyard. Snakes and lizards also still make me jumpy. There were a few times where I was walking from the cellar door across to the house and there was a snake on the driveway, laying in the sun. I immediately ran back to the cellar door to get Mum or Dad to deal with it.

A side effect of growing up on a vineyard and having a winemaker as a Dad has been that I’ve seemingly always had knowledge about grape varieties, the characteristics of wine and been able to explain the process of making wine as well as what would be happening in the vineyard at certain times of the year.  It’s a skill that has come in handy as I’ve grown older and gotten into drinking wine and now get to have more in depth discussions with Dad about the world of wine.

At the time of writing this, I’m living in Melbourne, where I have lived for the past 3 years while I completed my first degree at the University of Melbourne and worked part time in the wine industry. I unfortunately haven’t been able to travel home to WA for over a year due to Covid-19 but look forward to the chance to see my family and the vineyard again.