“Birds of a feather flock together” is an old English proverb referring to those with a common interest or personality that can often be found in a similar place. In this case it’s the many different type of birds who like to make their home here at Vineyard 28. We thought we’d take the time in this blog to introduce a few to you, so on your next visit you see who you can spy.

The first is our namesake the local ‘28’ Parrot. 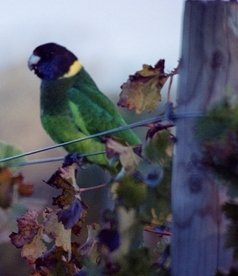 This is the colloquial name for the Port Lincoln Ringneck here in WA, apparently due to their contact call – a whistled “twen-ty-eight” which can be heard across the south-west forests. When planting the first vines these cheeky little parrots were a bit too helpful, snacking on new shoots. Dawn and dusk are the best times to see them here in the vineyard.

Who are some of our other feathered residents who ‘flock together’? 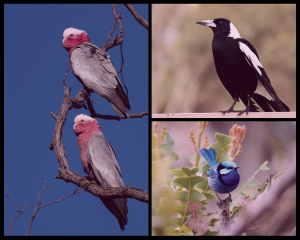 Galah – easily identified by its rose-pink head and usually seen in pairs. We often see them traveling in small groups around the vineyard. They love perching on the TV aerial of the house and chattering away to each other.

Magpie – the well-recognised black and white birds seen all over Australia sometimes frequent the vineyard, and often group together walking along Bagieau Road. They make an amazing array of sounds, and are also known to be territorial, although we never have issues with them here. We reckon they know who we are.

Blue Wren – Splendid Wren or here in the West ‘Blue Wren’. These cute little birds can sometimes be seen around the cellar door garden. Notable for their backward legs, and the male of the species being a vibrant bright blue whilst the females are a plain brown. You’ll usually see one bright gent surrounded by his harem of girls.

Kookaburra – known as terrestrial tree kingfishers, and although they are part of the Kingfisher family they are not associated with water. Here on Vineyard 28, they are best seen poised on a vineyard post early in the morning or at dusk keeping a beady eye on the ground, looking for a snack. Their loud laugh is often the first thing we hear in the mornings. 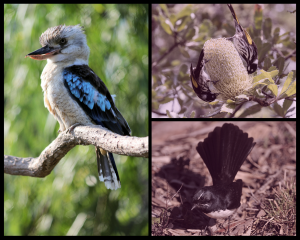 New Holland Honeyeater – these guys are seldom seen sitting still, loving the nectar from the flowers of the Banksias, Eucalypts and Grevilleas. They can often be seen near the grevillea or the bottle brush at the cellar door.

Willy Wagtail – the largest and most well-known of the Australian fantails. The name wagtail stems from the constant sideways wagging of the tail. They love to follow up in the vineyard. 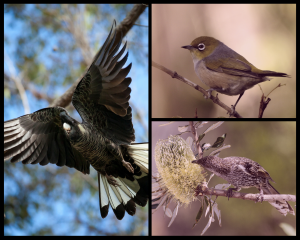 Western Wattlebird – a medium large honey eater, often found around near the flowering Banksia. They have quite a rough, loud squawking call.

Silvereye – the ‘pest’ in the vineyard, as they love grapes. Pecking holes in them once they are ripe and leaving devastation behind them. They are the main reason we have nets that cover the grapes from December through to harvest. It is a small bird with a conspicuous ring of white feathers around the eye and belongs to a group of birds known as white-eyes.

Carnaby’s Black Cockatoo – When we first moved to the property we used to see these birds arrive in very large flocks, blackening the sky as there was so many. These days they travel in smaller flocks due to the loss and fragmentation of their habitats. They love the pine cones, and sometimes they will roost on as many vineyard posts as they can find. Other times they will cruise across the vineyard grounds nibbling away at seeds. The Carnaby’s Black-Cockatoo is a large, dull-black cockatoo with a short erectile crest and a large bill. The bird is mostly grey-black, with narrow off-white fringes to the feathers, giving it a scaly appearance. This is relieved by a patch of cream-coloured feathers on the ear-coverts, and the tail has large white panels, especially noticeable when the bird is flying.

And not seen as often…

Scarlet Robin – we generally only see these little birds in Winter when the vines are bare. Generally, only as a single bird. The Scarlet Robin feeds mainly on insects and forages on or near the ground. It will sit on a perch and fly down to catch prey.

Elegant Parrot – Mark often encounters these flying past him when working in the vineyard. They are a slim parrot with golden-olive upper parts, yellow underparts and a two-tone blue patch on the wings (dark blue with a light-blue border). The face is yellow with a two-tone blue band that extends between the eyes, above the beak. The tail is blue with yellow outer feathers above, and wholly yellow below.

Wedge Tail Eagles – They have long wings (wingspan 2.3 m), a characteristic long, wedge-shaped tail, and legs that are feathered all the way to the base of the toes. The bill is pale pink to cream, the eye brown to dark brown, and the feet off-white. We always know when one of these chaps is in the area, as the vineyard goes very quiet, and all the other birdlife heads for security in the trees.

On your next visit …. 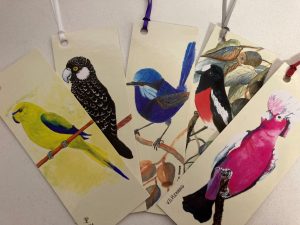 Be on the lookout for some of the regulars mentioned above. You can also support the Myalup Bird Observers by purchasing one or two of their gorgeous bookmarks. They feature birds found in the area, all from original paintings by local Harvey artists.

There are  numerous more birds we haven’t identified yet. We haven’t even started on the water birds you can find down on the wetland. That will have be to the next story. In the meantime if you want to research more then we recommend the BirdLife website.